Want to add a minimap to your Godot game, with simple fog of war reveal?  Then this is the perfect tutorial for you! =)

To follow along and see how this works you can download the project files from the minimap folder in my github repo.  The project is for Godot 3.3.3.

This project continues our prior tutorial on creating caves using cellular automata in Godot, and we will be using the generated caves as our map to work with.

To begin you want to create your Main scene in Godot with the following node setup: 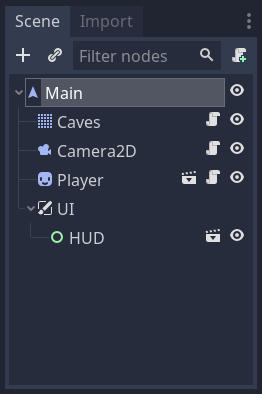 The first thing we want to do is make our player able to move around the caves with the camera following them, so make sure the camera is checked as Current, then lets add some code to the Camera2D node:

Next lets add some code to our Player Sprite so it can move around the caves by left clicking:

What this code is doing, is when you left click on the map, it uses Navigation2D to create a path with a number of points, and every frame we check if the path has any points; if it does we walk there and delete those points as we arrive at them.

* if you want a full tutorial on Pathfinding a 2D TileMap, check out the video by GDQuest covering this, which is where we got this code snippet from! https://www.youtube.com/watch?v=0fPOt0Jw52s

That is all the code we need, but this wont work just yet!  We need to add some NavigationPolygons to our TileMap.  To do that edit the Caves TileSet and select your ground tile that is walkable, go to the Navigation tab, and draw a square that covers it.  By doing this, we are saying which portions of the map we can walk on. 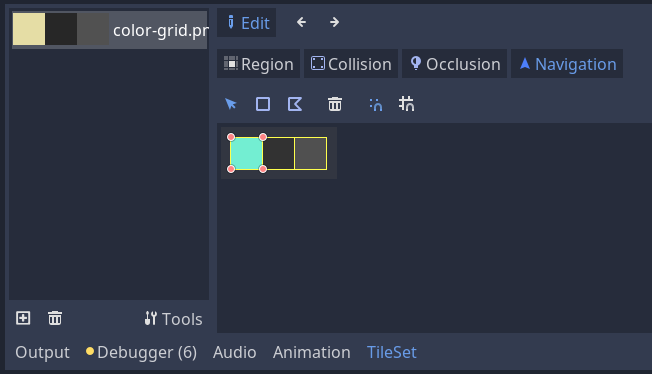 And now your player should be able to click to move around the caves!

Now lets create the Minimap!  For this we want to create a new scene with the following nodes: 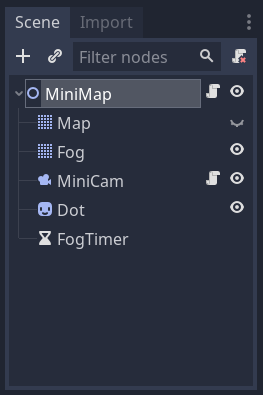 Lets start with the simplest code first here, we need to add a script to the MiniCam to make it follow the player around the minimap.  This is very similar to the camera script we used above:

Now, the last bit of code goes on the Minimap root node to to make the actual minimap work:

So first we generate the minimap based off the cave cells.  To do this, we loop through all the get_used_cells() in the caves tilemap, and then set those same cells on our minimap.

We also set a buffer of 15 cells in every direction, where we set these as the Roof tiles on the minimap if they are empty.  This is more a design decision, but if u do not do this they will be transparent, and because the minimap may be able to see further then the game world, we do this to make it look like the roof extends into the beyond.

When creating a minimap you'll want to make note of the size difference between it and your main map; here our main tileset is 32x32 and our minimap is 4x4, so its 8x smaller, which we can then use in calculations to determine where the player is, like in _process() above.

To make Fog of War work on the minimap is fairly easy.  All we want to do is hide the Map tileset in our minimap, and show the Fog tileset.  The Fog tileset is empty to start, but we tell it to copy the tiles from the Map minimap for all the squares near the player that they can see, which is done in update_fog() above.  As the player moves, we continue to update the Fog tileset, revealing all the tiles they can see.  This is then done on a timer for performance reasons (rather then every frame).

Showing the Minimap in the HUD

As the final step, we now just want to show our Minimap on top of our game world.  To do that you want a HUD scene made of Control nodes setup like this: 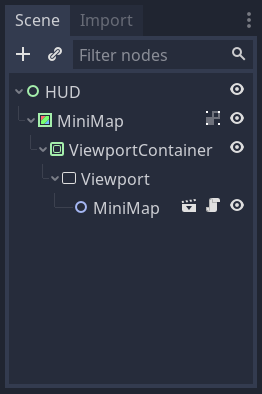 And once you've setup your HUD node, you're done and have a working minimap!

We hope this tutorial has been helpful for creating a minimap in your own game.  If you enjoy our tutorials and are up for offering us a bit of support, we have a kickstarter for Helms of Fury starting in 5 days that could use a few more followers!

Hope you have a great weekend, and if you have any questions about the tutorial feel free to chat with us as @abitawake on Twitter =)